On the 20th of June, the Chief Operating Officer of Goldman Sachs Group Inc. David Solomon reported that their investment bank is studying blockchain-transactions and developing tools for working with crypto-currency transactions. According to Solomon, in the future, the company plans to launch full-fledged services for futures trading using bitcoin, rather than Fiat money. After all, Goldman Sachs should "develop its business and adapt to the environment," assured the COO, although earlier the bank's CEO Lloyd Blackfen claimed that cryptocurrency is not worth of any attention.

The attitude of banks to crypto-currencies hasn’t changed since the moment of their appearance. Financial and credit organizations still do not know how to perceive blockchain technology and the entire industry: some banks (China Minsheng Banking, Commerzbank, UniCredit and many others) participate in research and testing of blockchain usage for making transactions to international accounts. Other financial institutions, such as BNP Paribas, are confident that the cryptocurrency is doomed, since it differs from the traditional monetary system. Although in early 2015 a large world bank from France was going to include bitcoin in its currency fund.

What are thinking other financial sector leaders from the TOP-100 rating of the world's banks in terms of assets from S&P Global Intelligence about the blockchain industry and cryptocurrency in general?

CCB has launched a platform from the block chain for the solution of international interbank loans for small businesses, which will be implemented in the retail and commercial banking unit in Hong Kong. This became known after the Deputy Director General of CBB Guo Zhipeng confirmed the beginning of cooperation with the largest software manufacturer IBM.

Agricultural Bank announced in its annual report that the bank has developed a blockchain-network for loans to unsecured Internet sellers in the agricultural sector. The new technology will help fully automate the process of providing loans.

Bank of China have also declared their desire to create own digital purse. In addition, the bank's technical specialists completed the testing of their blockchain in the past year and have already begun to implement the system in their banking units. A month ago, it became known that the Bank of China together with Agricultural Bank wants to create a platform that would help monitor the work of the fund to alleviate poverty in Tibet and check all social payments for the poor. Blockchain will make it possible to increase the transparency of all payments, and therefore, to raise the standard of living in the underdeveloped region, convince bank experts.

It is important to emphasize that the introduction of blockchain-technologies is carried out in state banking bodies despite the government ban which concerns the ICO, and is contrary to the inclination to liquidate mining.

Banking unit in Tokyo Mitsubishi UFJ Financial Group in 2017 announced the creation of a platform for new payment methods using digital currencies. But MUFG did not stop there and is planning to launch its own crypto-exchange and cryptocoin, which will be supported by the national Japanese yen, as well as the service of separate bitcoins-accounts at the beginning of 2019. About 100,000 customers of the company will be able to participate in testing the network and digital money. To do this, you need to download an app that automatically converts a user's deposit to MUFG Coin tokens by an equivalent ratio to a yen 1: 1.

JPMorgan is one of the most interested in blockchain banks. The information concerning regular tests and studies periodically appears in the media and on the pages of government agencies. So, for example, in May of this year, on the website of the US Patent and Trademark Office (USPTO), was published JPMorgan's patent application for the blockchain system on implementation and coordination of financial transactions. After all, according to the bank experts, the blockchain will help to improve the already existing banking operations.

Earlier, the bank launched the platform of interbank payments using the Quorum blockchain. But despite the proclivity for the use of technology, JPMorgan Chase prohibited buying cryptocurrency from their credit cards because of the high risks. Moreover, bank traders are threatened with sack for trading bitcoins and other crypto-currencies, as, according to the head of JPMorgan Chase, James Dimon, there are certain reasons for this: "First, it contradicts our rules; secondly, they [traders dealing with cryptocurrency] are fools."

The British conglomerate HSBC Holdings Plc, as well as many other leading world banks, is testing the blockchain technology. In May of this year, together with ING Bank NV, a successful transaction was made using a digital app. The letter of credit was reinforced by the supply of soybeans, which were transferred from Argentina to Malaysia. And instead of 10 days it took a day to conduct the transaction, says HSBC's director of innovation and growth of commercial banking Vivek Ramachandran.

During the period when bitcoin became popular among the ordinary people, in 2014, the largest French bank assumed that the new digital currency would be a substitute for the existing payment system. BNP Paribas even intended to add bitcoin to one of its funds, stated financial institution analyst, Johann Palichata.

But two years later, the BNP Paribas’ mood and attitude towards bitcoin changed dramatically. Experts published a report in which they described their vision of the bitcoin prospects. In their view, cryptocurrency will not be widely spread due to its structure, which is aimed at restraining the growth and absence of a "lender of last resort". Also, the bank notes that the cryptocurrency may pose a risk to the monetary policy of individual countries.

Around the same time, BNP Paribas launches a testing program for processing payments and transactions between the bank branches, which are located in Germany, the Netherlands, and the UK. The pilot project was then part of the Bank's "Cash Without Borders" program for international payments, which uses distributed accounting technology to avoid delays, unexpected costs and errors in processing, as well as provides real-time accounting and reporting, says the regional head of BNP Paribas CIB transaction operations, Jacques Levet.

BoA is one of the leaders in the research and implementation of blockchain into the banking system. It is this financial institution that accounts for the largest number of patent applications that relate to the automatic exchange of digital currencies.

However, in March 2018, the bank, together with JPMorgan, banned the use of its credit cards for the purchase of cryptocurrency. This is due to the fact that customers can spend on large amounts, which are then difficult to pay. Although unlike its competitors, BoA reserved the right to deposit to digital assets through debit cards.

At the same time, there was published the annual report of Bank of America on the results of 2017, in which it was said that bitcoin and other crypto-currencies pose a threat to the bank’s business model. Digital assets got to the list of risks along with a number of economic, geopolitical and operational risks, reported the head of the Department of Operations and Technology of the WA Catherine Bessant, who previously spoke about patents. 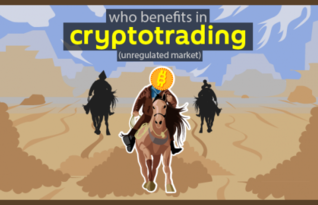 Who benefits in cryptotrading on unregulated market

4 Years ago at Articles

We will send you an e-mail with further instructions

Have you found an error??